[caption id="attachment_28065" align="aligncenter" width="700"] Images from cannondale.com[/caption] The Cannondale Jekyll series is built for speed, lots of downhill, mountain biking, big-gapping, lung-burning, forearm-pumping, and rock garden-traversing speed. Built with more than a few unique features, the Cannondale Jekyll series is designed to be the fastest, cleanest, and most stable enduro downhill bike you’ve ever ridden.

In this Cannondale Jekyll review, we’re going to tell you all about the Cannondale Jekyll series and who it’s designed for. With 4-bar systems, a high-pivot idler pulley, and size-altered kinematics, the Jekyll is more than just a basic enduro frame.

If you’re a downhill rider looking to get rad, you’ve come to the right place.

In this review of the Cannondale Jekyll series, we’ll tell you about both models: the Jekyll 1 and the Jekyll 2. Both use the same carbon fiber Cannondale frame, but with different suspension set-ups and drivetrains to help fit your budget.

The Cannondale Jekyll series is made of absolute rippers. These bikes are designed for the steepest drops, the gnarliest trails, and the fastest descents.

Cannondale’s Jekyll frame is an enduro designed for racing, bike park sessions, and “high-speed mobbing,” according to Cannondale.

What makes the Jekyll series truly stand out is its Guidler idler pulley/chain guide. It doesn’t look like anything we’ve ever seen on a bike – let alone a gnarly enduro mountain bike. This guide helps keep the chain stable, while can improve shifting and drivetrain efficiency.

The Cannondale Jekyll is available in two models: simply named the Jekyll 1 and Jekyll 2. You can also purchase the Jekyll frameset on its own, a carbon fiber enduro frame with 170mm of suspension.

The Cannondale Jekyll 1 begins at the frame, which is made of carbon. It’s a Proportional Response Tuned Cannondale frame with 165mm of travel and a unique Guidler idler pulley/chain guide. Its rear shock is actually hidden inside the frame, in a space Cannondale dub the “Gravity Cavity.”

The shock is covered by a frame protector. It is still open on the sides which helps prevent water or mud from gunking up the shock, while also allowing the extra airflow to keep the shock nice and cool.

A Fox Float Factory 38 fork with 170mm of travel gives the Jekyll 1 plenty of bounce at the front end. The hidden rear shock is a Fox Float Factory X2 with adjustable High-Speed/Low-Speed Compression. High Speed/Low Speed Rebound not included in other Jekyll models.

Its brakes are upgraded as well, with SRAM Code RSC hydraulic discs, compared to the Jekyll 2 which uses Shimano M6120 hydraulic disc brakes.

As the highest-quality build in the Jekyll family, the Jekyll 1 is finished with SRAM GX Eagle components. Some additional upgrades include SRAM NX Eagle 12-speed chain, and SRAM X1 Eagle 30T crank.

The Jekyll 1 has the highest number of climbing gears in the Jekyll series, with a 10-52t SRAM GX Eagle 12-speed cassette.

Tubeless-ready WTB KOM Trail i30 TCS rims and Maxxis tires are great options at this price point. They can handle the gnarliest descents and hardest drops. The Jekyll series comes with 29” wheels and 2.5” tires.

Finally, there is the Cannondale DownLow Dropper post with the Matchmaker lever. It has a wider drop range than the Jekyll 2 with 125mm (S), 150mm (M), and 170mm (L-XL) of drops. 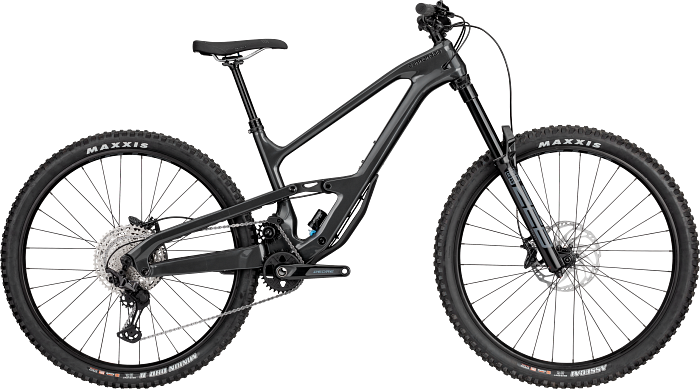 The Cannondale Jekyll 2 is the second bike in the Jekyll lineup in terms of quality and price. At $4,500, the Jekyll 2 offers a hefty discount off of the $6,100 Jekyll 1. Main sacrifices come from its components and suspension.

The Jekyll 2 also has a RockShox Zeb Select fork with 170mm of travel, which has the same thru-axle, offset, and tapered steerer measurements as the Jekyll 1’s fork.

Both Jekyll 1 and Jekyll 2 have the same frame. The carbon fiber Jekyll frame with 165mm of travel, and a Guidler idler pulley/chain guide makes this bike truly unique.

The Jekyll 2 comes with a downgrade groupset in the Shimano Deore, which includes a 12-speed 10-51t cassette that is only one tooth away from matching the Jekyll 1’s 10-52t SRAM GX Eagle cassette.

Wheels are also different on the Jekyll 2 which has WTB STX i30 TCS tubeless-ready rims. The tires are the same as the Jekyll 1, with the Maxxis Assegai and Maxxis Minion front and rear tires.

The final differences between the Jekyll 2 and Jekyll 1 come in the handlebars, stem, and dropper post. While the Jekyll 1 branches out to FAS and Fabric Scoop for its stem and saddle, the Jekyll 2 uses Cannondale gear all the way through. The Jekyll 2 also uses a TranzX dropper post with 150mm of travel for medium through XL frames. 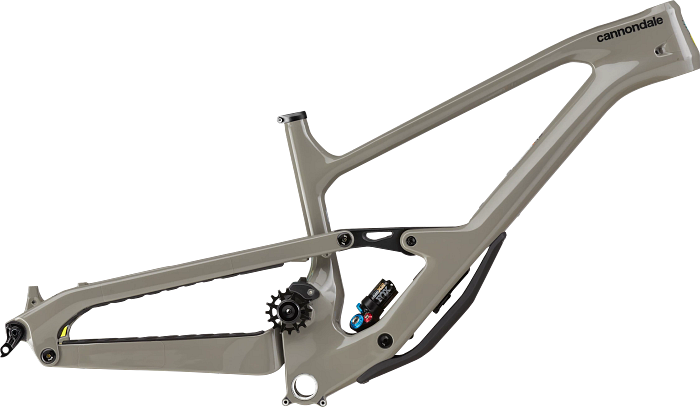 The Cannondale Jekyll frame is one of the cleanest-looking mountain bikes frames you will ever see. Especially for an enduro bike. The high-pivot idler pulley is unique to the Jekyll frame. You can hardly see the rear shock which is hidden in the Gravity Cavity.

This full carbon frame has 165mm of travel and includes a Proportional Response tuned suspension which helps you mold the bike exactly how you want it.

The Proportional Response system can alter the suspension, frame geometry, and chainstays to create a perfectly-tuned ride, just for you.

A tapered head tube and adjustable rear shock help cushion the blows of gnarly trails without losing speed or power.

Overall, the Jekyll frame pushes everything down low, including the rear shock and bottom bracket, which helps lower the bike’s center of gravity and keep the frame stable over high-speed descents.

If you’re still undecided on the Cannondale Jekyll, consider the Proportional Response system. It helps tune your suspension system and frame details to fit specific rider dimensions, the center of gravity, and riding preferences.

Downhill riders, seasoned racers, and shred-enthusiasts will love the Cannondale Jekyll. It promises to be one of the most fun bikes you’ve ever ridden.

Its quality build and multiple models offer something for every type of downhill rider, whether you’re on a budget or looking for the best of the best.

The Gravity Cavity keeps the rear shock clean and protected. At the same time, it increases stability by keeping the bike’s center of gravity as low as possible.

The size-specific kinematics of the Cannondale Jekyll series is one of its most unique and valuable features, also challenged by the high-pivot idler pulley above the crank.

Overall, the Cannondale Jekyll is one of the most impressive, capable, and fun enduro bikes we’ve ever seen.

Backed by solid components, good tires, and a carbon fiber frame, the Jekyll is ready for the steepest and gnarliest trails.