Home » Articles » How Much Should I Pay For A Bike?

How Much Should I Pay For A Bike?

I love numbers and enjoy putting things into perspective. So let's only rely on numbers. Instead of giving simple answers, I'd like to help you change your mindset. Are you ready? Let's go!

I love numbers and enjoy putting things into perspective. So let’s only rely on numbers. Instead of giving simple answers, I’d like to help you change your mindset. Are you ready? Let’s go!

We hear too often that bikes are expensive.

P.S. In this article, I’ll show you how you can get a bike for free. (Not clickbait!)

Let me ask you, how much do you pay for your car lease?

Let’s now compare that to the price of a bicycle.

If you divide this price by the average lifespan of a bicycle (which is at least four years), you will then get the monthly costs.

That’s more than 10 times lower than what the average American pays for a car! Wow.

Why I Divide The Bike Price By The Bike’s Lifespan In Months?

Most Americans get paid weekly or biweekly. We live from week to week and from month to month.

However, when it comes to bicycles, most people only see the MSRP. Psychologically, if you rank bikes online by price, you’ll come to think that cheaper bikes have a fairer price and that the others are too expensive.

I think that’s a logical fallacy.

So, let’s put things into the right perspective—weeks and months.

We Can Improve This Calculation Further.

Let’s assume you sell your bike later on for $1250 (which is quite a fair price).

But…How Much Should You Pay?

Let’s assume that you find electric bikes interesting and want to step into this world. As always, the budget is limited.

You have five bikes in your mind:

C) Bike your brain wants to buy — It is a decent-looking, mid-range bike with a good balance between the price and the components. Price $1,400

D) Bike that you consider to be the best one you should buy — Higher-end components and better build. Price $3,000

E) Bike that you promise to buy if you win the lottery — The top model on the market with a price tag of a whopping $7,500

*We tried to devise a realistic scenario, but these numbers are still for illustrative purposes only.

What Can We See?

Bike A (used bike) and Bike B (cheap option) have a useful lifetime of two years. After that, you typically have to make a bigger investment to change the derailleurs, cranks, wheels, and battery plus motor.

In this scenario, (without factoring in the repair costs) the monthly expenses would be $9 and $25 per month, or $2.2 and $5.8 per week, respectively.

Bikes C, D, and E are high-quality models. Their prices are higher and so is their resale value. Decent manufacturers like woom, Cannondale, Yeti, Ibis, Santa Cruz, etc., keep a high resale value if taken good care of.

If we compare the Bike C with the cheaper Bike B (both were new), then we see that the cheaper model was more expensive. We didn’t calculate the repair costs but these are included in the lower resale value.

Conclusion: The top-tier bike costs just 13.5% the cost of an average car! A bike with great components – just 5.4%!

Let me show you how to get the top model for free.

Learn now: How To Afford a Bike (For Free)

Let’s assume that you want a bike that costs $3,000. As you saw above, the monthly cost throughout its lifespan is around $42.

There are some simple actionable things you can do to achieve that:

There’s a lot of motivation to be found here.

“But… Bikes Are Expensive.”

I don’t want to sound ignorant, but I think this sentence should be reversed.

Too many bikes are too cheap. They don’t even deserve to be called a “bike” because they don’t have good enough components to be reliable for years.

Components cost money, so $200 can’t get you good specifications. The perfect money to value ratio leans more towards $500 than $200. 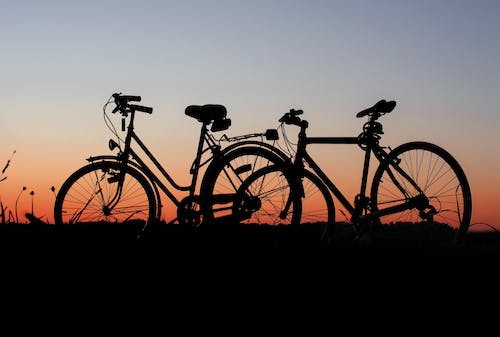 How Much Should I Pay For a Kids’ Bike?

That’s the one thing that concerns me the most.

I see that too many parents want to cut corners when choosing a bike for their kid.

I don’t know why, because it is pretty easy to choose a kids’ bike. Basically, all you need to know is their age and off you go. Try to do the math for kids’ bikes that cost $100, $300, or $500 and you’ll be surprised how tiny the difference is.

By paying more upfront, you’ll get a bike that is light, has good geometry, and is very reliable.

What Do You Get By Paying More?

Not So Black and White

As you can see, things are not completely black and white. Oftentimes, things that appear cheap end up being more expensive, and vice versa. That’s the case in the cycling industry as well.

When deciding how much money to spend on your next bike, you should look at the bigger picture.

Include the calculations we talked about above and you’ll see that your perspective will change (rightfully so!).

We spend huge amounts of money on unnecessary things every week, month, and year, without blinking an eye. If you divert those expenses towards your cycling budget, you can have the bike you’ve always dreamt of in no time.

By golden line, we mean the perfect balance between components and price. It is quite hard to find it, but here are our thoughts:

Seriously, it’s not worth it. Decent bikes are still quite reasonably priced compared to cars. If you decide to be frugal now and buy a cheaply made bike, you’ll only be spending more in the future.

Getting the most value and spending the least doesn’t always mean paying the lowest price.

So keep our calculations and examples in mind when you’re in the market for a new bike the next time to be able to make smarter choices.

NB! You can carry this mindset over to other areas in your life too.

2 thoughts on “How Much Should I Pay For A Bike?”