The new and revamped Surly Disc Trucker gets improved geometry and user-friendly components but keeps the same-old ride feel that we love so much. 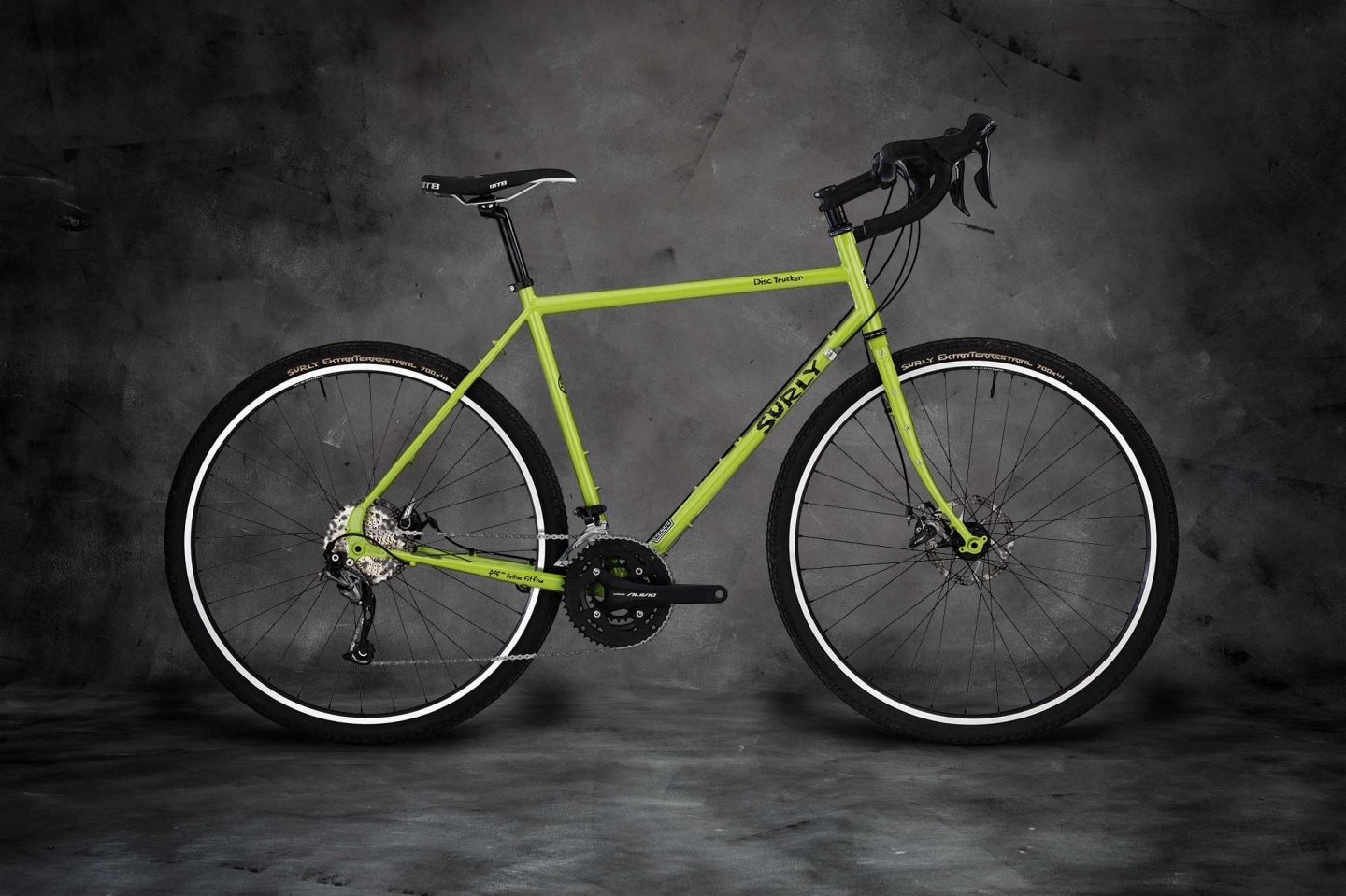 The new and revamped Surly Disc Trucker gets improved geometry and user-friendly components but keeps the same-old ride feel that we love so much.

The Surly Trucker bikes have a long tradition and a strong reputation in the cycle touring circles. The rim-brake Long Haul Trucker has been around since 2004, whereas the Disc Trucker was introduced in 2012. No wonder these are the favorite touring bikes of so many full-time world travelers.

The Surly Disc Trucker has seen some big improvements and significant changes. Despite that, this is still the good-old touring bike that emphasizes comfort, practicality, and extreme value for money.

If you’re planning to cycle the world or explore your area more on two wheels, you should keep reading to find out what the new Disc Trucker is all about.

So what exactly changed and what stayed the same on the Surly Disc Trucker? There are some features that we welcome and others that don’t fully align with our views.

Full overview of the brand

Just looking at this lengthy list of changes, you might suspect that Surly Disc Trucker is less impressive and more expensive. But that’s not really the entire picture. The bike is now more comfortable, more user-friendly, and offers better versatility than ever before.

The 2021 model of Surly Disc Trucker is the first real update this bike has received in eight years. Therefore, we are pretty excited to analyze it, compare it to the old version, and find out whether Disc Trucker is still one of the best touring bicycles in the world.

Spoiler Alert: It’s still very good, though not quite the same.

At first glance, Disc Trucker’s frameset looks pretty much the same. Both the frame and the fork are made of 4130 cromoly steel. However, the color is different—Surly dubs it Pea Lime Soup, but the standard black is still available as well.

The frame has a different geometry when it comes to the stack measurements. The stack is now 20-30mm taller in all frame sizes. That will put you in a more upright riding position without having to use a silly number of spacers. Plus, the handlebar has a 30mm rise, which pretty much gives you a birdseye view of the road ahead. 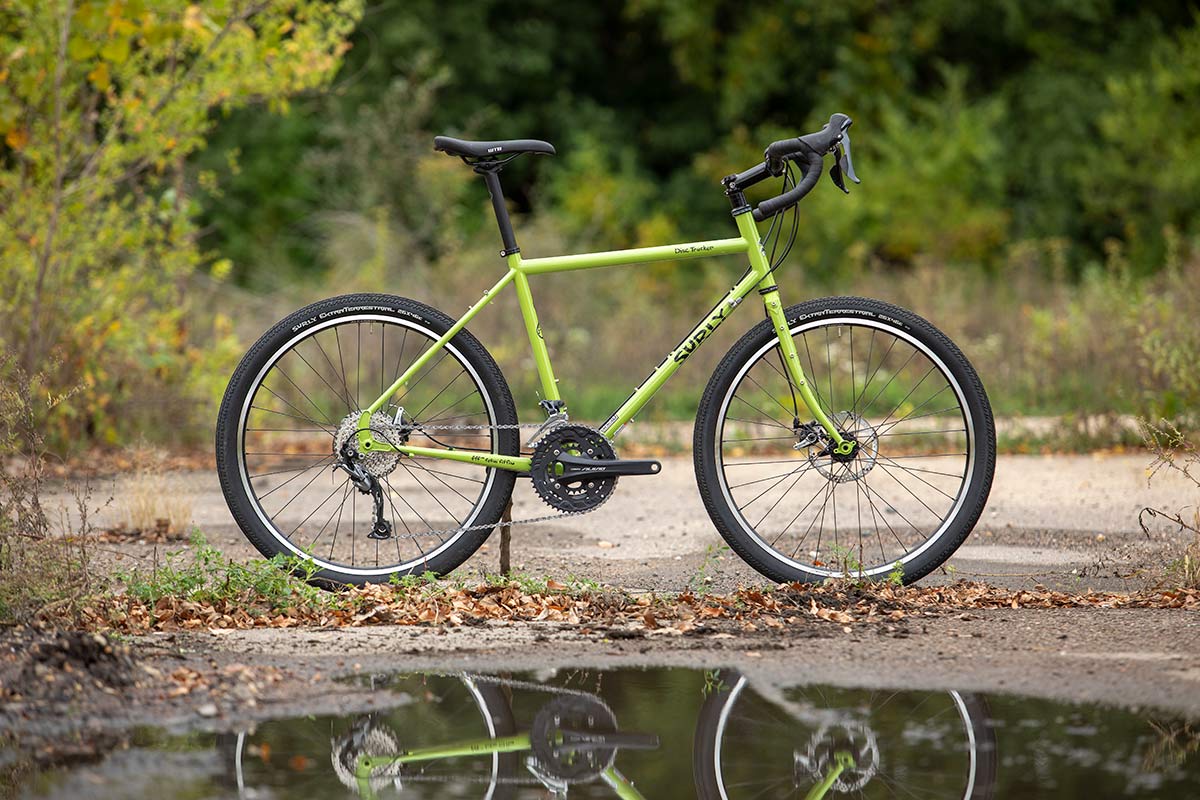 The downside is that the standover height is now 8mm taller in the 42–56cm frame sizes, despite Surly’s efforts to slam the top tube.

We like these changes as a whole, as the bike now feels more comfortable and more nimble on the road. That’s especially noticeable when navigating tight turns at low speeds fully loaded.

Old-school riders might frown upon this change, but Surly got rid of bar-end shifters and went for an STI setup for the 2021 Disc Trucker. This is a much more user-friendly option, meaning that even touring beginners can enjoy the bike, so the change is understandable. 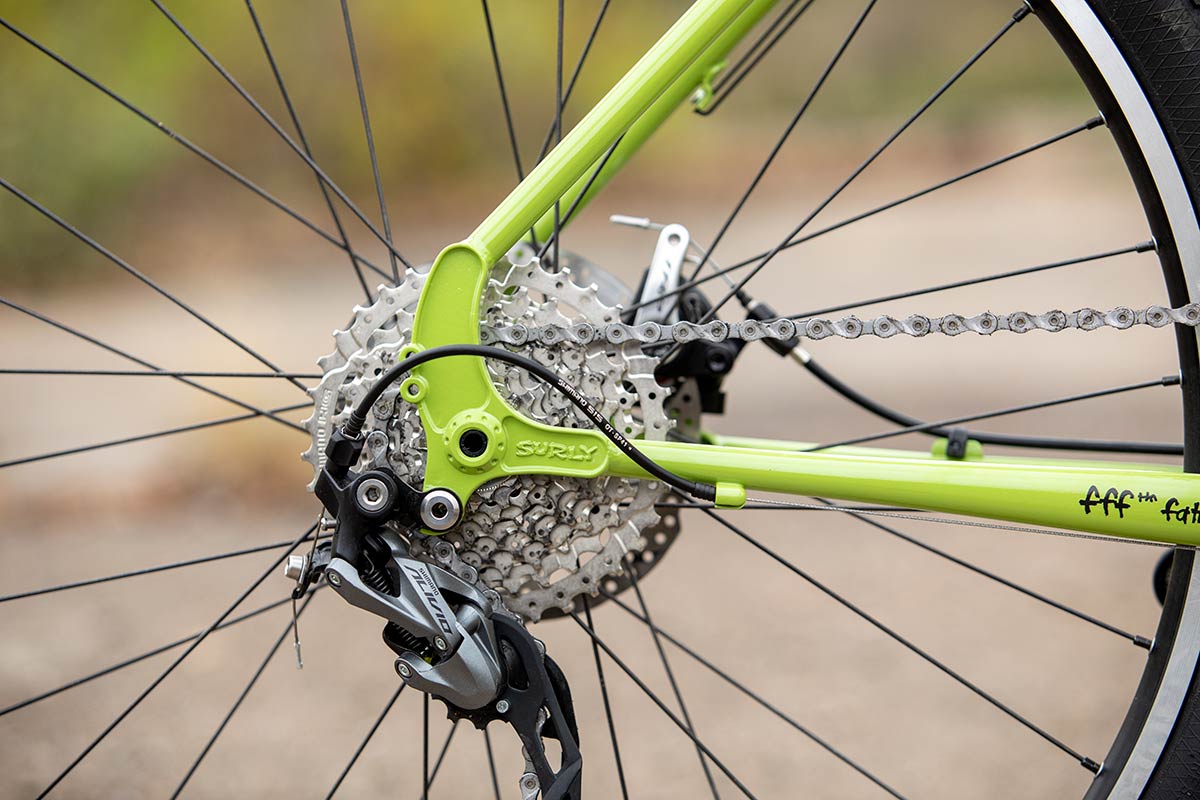 In terms of groupset quality, Shimano XT has a better reputation and sits higher in the hierarchy compared to Alivio and Sora. However, these are dependable groups as well, so most riders will not see a big difference in shifting smoothness and precision.

Surly Disc Trucker comes with Alex Adventurer 2 rims in 26″ or 700C diameter. The rims are now tubeless ready but feature 32 instead of 36 spokes. That’s a bit of a letdown for heavy riders who like packing even heavier, but it’s definitely not a deal-breaker as these rims are pretty strong. 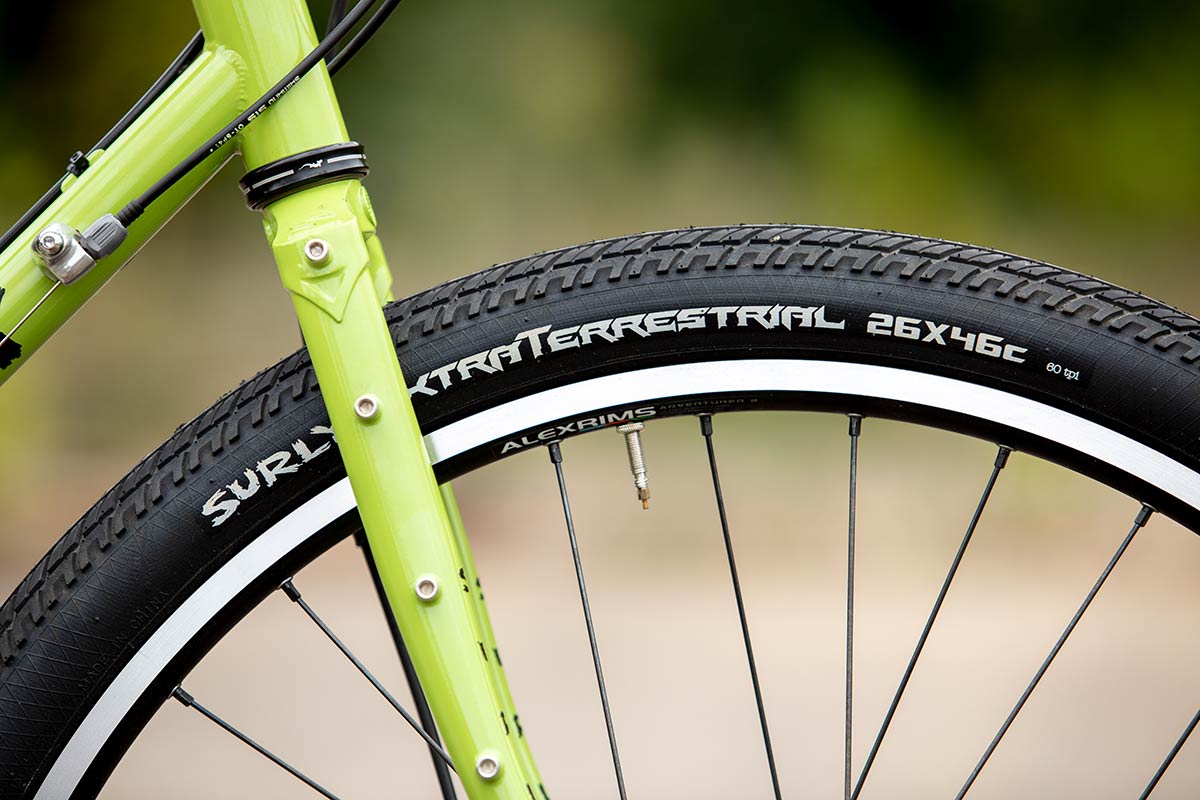 Of course, 26″ wheels are the best choice for traveling through remote areas and developing countries, as it’s very easy to service the rims or replace the tires. However, finding high-quality 26″ tires in first-world countries can be a challenge, which is why it’s good that the 700C option is available as well.

Just like the previous model, the Surly Disc Trucker has mechanical disc brakes. However, these have been upgraded, so you’ll now get TRP Spyre C with 160mm rotors instead of Avid BB7. As a result, you’ll get more braking power and more precision than before.

The new Disc Trucker also gets 12mm thru-axles front and back which improves the strength of the wheels and the integrity of the bike. The design includes one open dropout, so you can easily remove the wheel without completely removing the axle, which is a smart solution.

Thanks to a large number of eyelets on the frame and the fork, Surly Disc Trucker can be packed quite heavy. Even though the chainstays are now 10mm shorter, there’s still more than enough room for full-size rear panniers. 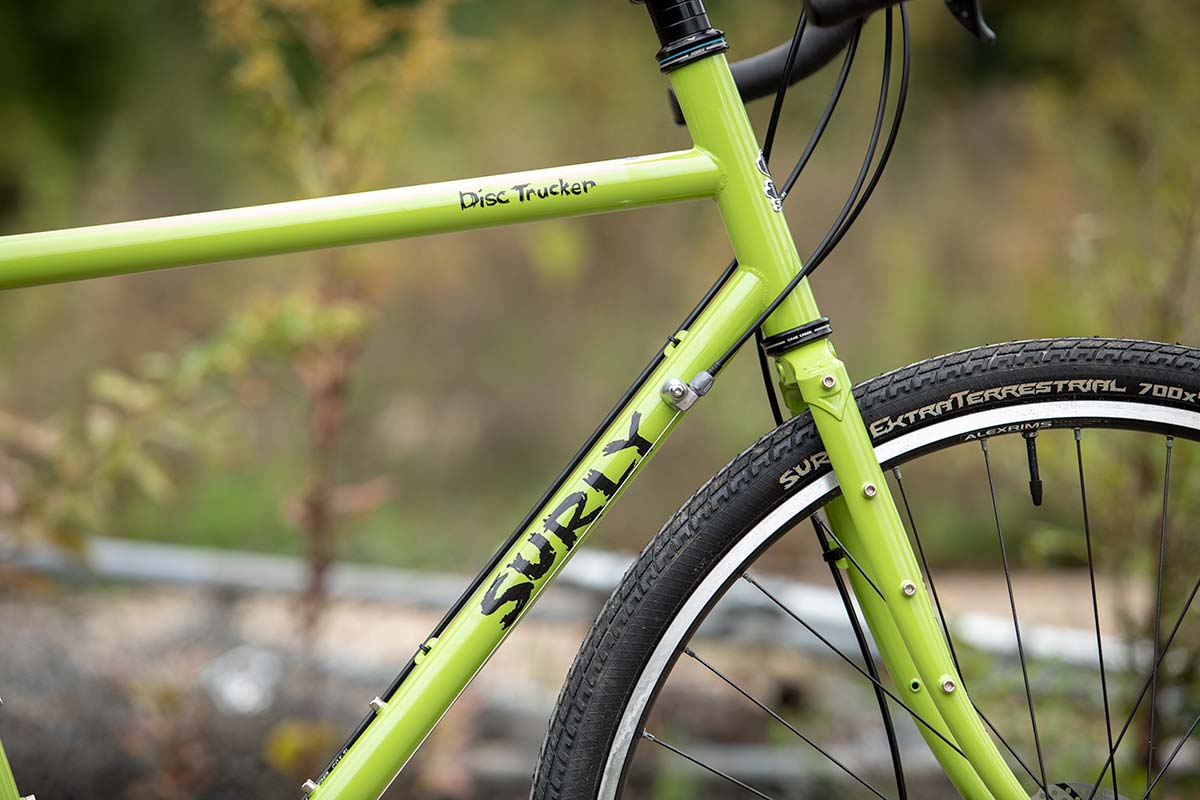 The fork features three-pack mounts and internal routing for a dynamo hub. There are also mounts for two water bottle cages inside the front triangle and one under the downtube for another water bottle or for a fuel canister.

It’s good to know that Surly Disc Trucker is still available in 10 frame size, which makes it super-easy to find the perfect fit. Unfortunately, Surly does not give specific frame size suggestions based on rider height for the Disc Trucker.

However, there’s a detailed geometry chart that will help you choose the right size based on the frame measurements. To give you an idea of the geometry, the 56cm frame has a 387.5mm reach and a 613mm stack, with a 71.0° head tube angle.

Additionally, you can check out the company’s general size chart for a rough estimate of your recommended frame size:

Check out our answers to some of the most commonly asked questions about Surly Disc Trucker.

Are Surly Bikes worth the money?

When it comes to touring bicycles, Surly bikes are considered to be some of the best in the world. Surly makes high-quality bicycles specifically for traveling. They are built around durable steel frames and equipped with reliable components that can be serviced easily anywhere in the world.

Where are Surly Bikes frames made?

Surly’s frames and forks are manufactured in Taiwan and then shipped to the USA for assembly. Taiwan is well-known for having the biggest bicycle manufacturing industry in the world, so most brands outsource their production there to cut down on costs.

Yes, Surly Disc Trucker is a great choice for long-distance touring, that’s what this bike is made for. It’s available with either 26″ or 700C wheels, it has a wide-range gearing setup, high-quality components, and lots of mounts for carrying cargo. Plus, it’s made from steel which is easy to repair anywhere.

Surly Disc Trucker weighs around 27.9 lbs. without pedals, which is not ultra-lightweight but is not heavy either, considering this is a steel touring bicycle. Most riders will pack this bike with heavy bags and panniers anyway, so a few pounds of weight don’t make a big difference.

If you live for long bicycle tours and devote all your free time to exploring the world on two wheels, Surly Disc Trucker is an excellent choice. 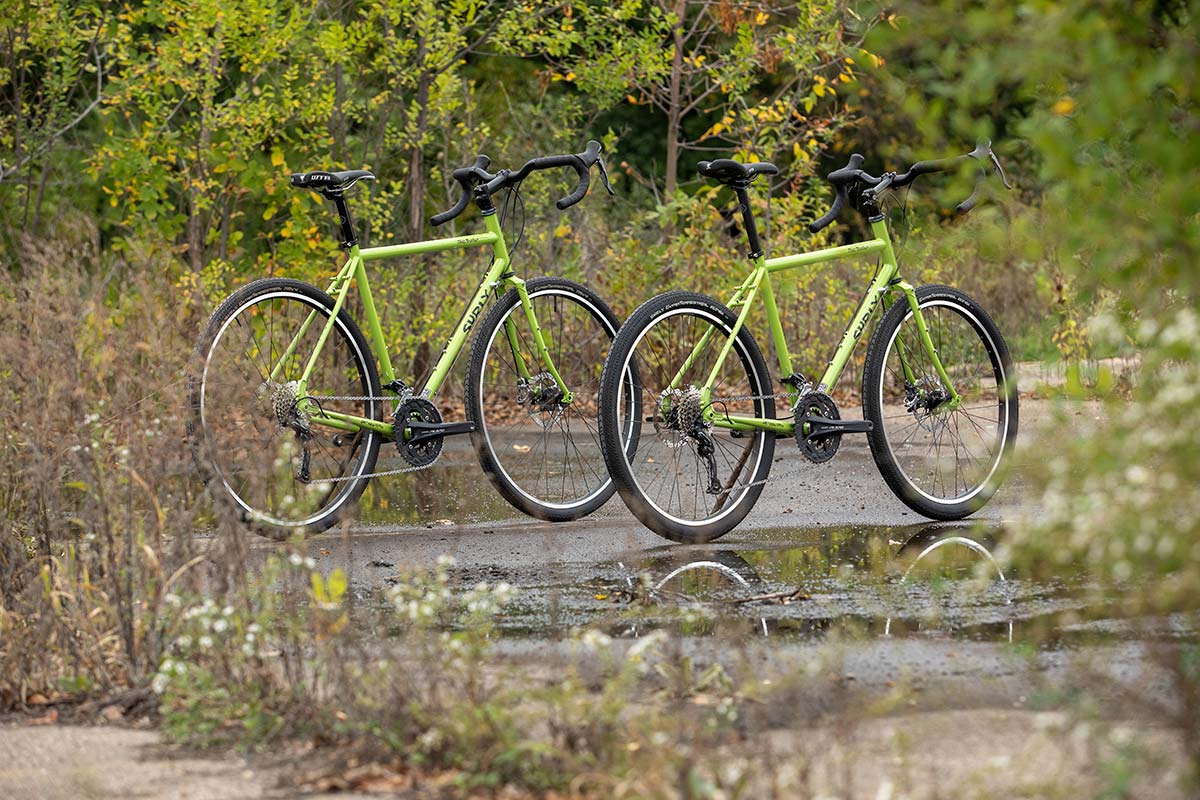 This bike has an improved upright geometry that you can maintain for hours, day after day, on week-long or month-long tours. Compared to the previous version, the 2021 Disc Trucker also has more user-friendly components, thru-axles, wider tire clearance, and better cargo-mounting capabilities.

Surly has gone the extra mile to revamp their former winner and make it even better without affecting the ride feel or the bike’s established spirit. Therefore, if you want a dependable touring bicycle that will be happy to accompany you on a trip around the world, Disc Trucker is a foolproof choice.